Search for articles or tutorials

After clicking "Forms" on the navigation bar, you will enter the form list page, which is also called Form Manager page. There, you are able to create a new form and manage the existing forms. Now, let's take a closer look at the features in the page.

The Form Groups toolbar is at the top of the page, which consists of form groups, search box, and "New Form" button.

The system has 4 pre-defined form groups:

All: it collects the forms created by all the members in your MikeCRM organization;

Starred: you may star a form to follow it, which will be marked with a yellow star and be categorized into this group. Moreover, after you've starred a form, the next time you visit the Form Manager page, the list will show the Starred group firstly by default, allowing you to check the updates of the starred ones directly.

Mine: the group stores forms created by you only.

Ungrouped: You can create form groups more than the four pre-defined ones. If your forms haven't been classified into any of your customized form groups, they will be categorized into the Ungrouped one.

Clicking the hamburger icon "…" at the right side of the Ungrouped, you will open a pop-up window to manage groups like creating a new group by hitting Add Group button, and renaming or deleting existing groups. Please note that deleting a form group will not delete the forms in it. After the group has been deleted, the forms in it enter the Ungrouped group.

We don't limit the number of form groups you can create. However, if there are too many groups, the later created ones will be collapsed to maintain a good layout. And you need to click "…" button to unfold them. You may also place some groups ahead of others by starring them in the Manage Groups window. Since the starring actions of each member are fully independent, you need not to worry that your starring actions will change the form group order of other members.

Right next to the search box, there is a green button labelled with "+ New Form". Clicking it, you can start the process to build a new form.

Every form folder is actually a form list, consisting of one form per row. There are many details in the form list, and let's go into them one by one.

At the same form list, the display order of different forms matters a lot, since we always want to view them based on our needs. By default, the system arranges sticky forms firstly and then sort the rest by created time in descending order. Besides, there are other sort options:

Starred first: it means the starred forms will be placed at the top of a list, and the rest forms will be displayed by created date.

Time created (Latest/Earliest): it means forms will be sorted by the date and time they were created.

Total Submits (Highest/Lowest): this means the system will arrange forms by the number of Submits the forms have collected.

Form records are making up of forms row by row. The basic units of each form record cover plenty of information relevant to the form. Let's get familiar with them from the left to the right.

Form name: it's the name you set when you create a new form. To ease future management, you are strongly recommended to modify the default name "New Name" to the one you like. You can also rename the existing one by hovering over a form record and clicking the pencil icon next to the form name. In addition, clicking the form name will open a window to quickview the form.

Form URL: it is the URL to visit the form. When you mouse over a form record, "link" icon will show itself next to the URL. You may click it to open and visit the form in a new window.

In addition to that, if a form is designed with special settings or widgets, the corresponding status icons will show themselves next to the form name to remind you.

Visiting Settings: it suggests that the form uses a visiting setting option in the Global Settings, such as Visit by Password, Fill in the Form only in WeChat, and Active Period of Time.

Logic Form: it indicates that the form uses Form Logic extension to hide or show questions based on the answers of people.

The column shows which group the form belongs to. One form can be categorized into only one group. You may click the group name in the record to change a form's group and manage your form groups by the way.

A form can have 3 kinds of status in total: Unreleased, Collecting, and Stopped. A newly created form with Unreleased status does not have form link, so that visitors cannot access nor submit the form. After released, it enters Collecting status. However, you may switch the form status to Stopped by clicking the grey square button at the right side of the form record. Please note, after the click, the button will change from the grey square to green triangle. Clicking the green triangle button will switch the Stopped to Collecting, reactivating the form to collect Submits.

Tips: With the Active Period of Time or Submit Limitation set, the form will be in the status of Collecting even if it is outside the active period or its Submits has reached the upper limit. In addition, the number of Submit limitation and the active period will be showed directly below the Collecting status.

The Submit quantity tells how many Submits the form has collected and the red badge icon displays unread Submits count. Clicking the button, you can enter corresponding Submit Manager page to view Submit list and charts.

Last Submit
It refers to the date and time when the last Submit comes in, helping you know the updates of its submit.

Created by/at
It shows the form creator as well as the date and time the form was created.

Operation Buttons
3 operation buttons are at the very right of a record.

Edit button: clicking it, you can enter the form design page to change form content and settings. 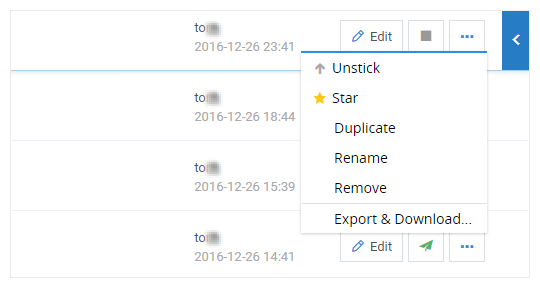 Tips: it is worthy of mention that sticky feature has an impact on every member in your MikeCRM organization. When you make a form sticky on top, the form will also be sticky in other member's form list. However, star feature works only to you. So, if a form just requires your attention rather than other members', you may star it rather than stick it. 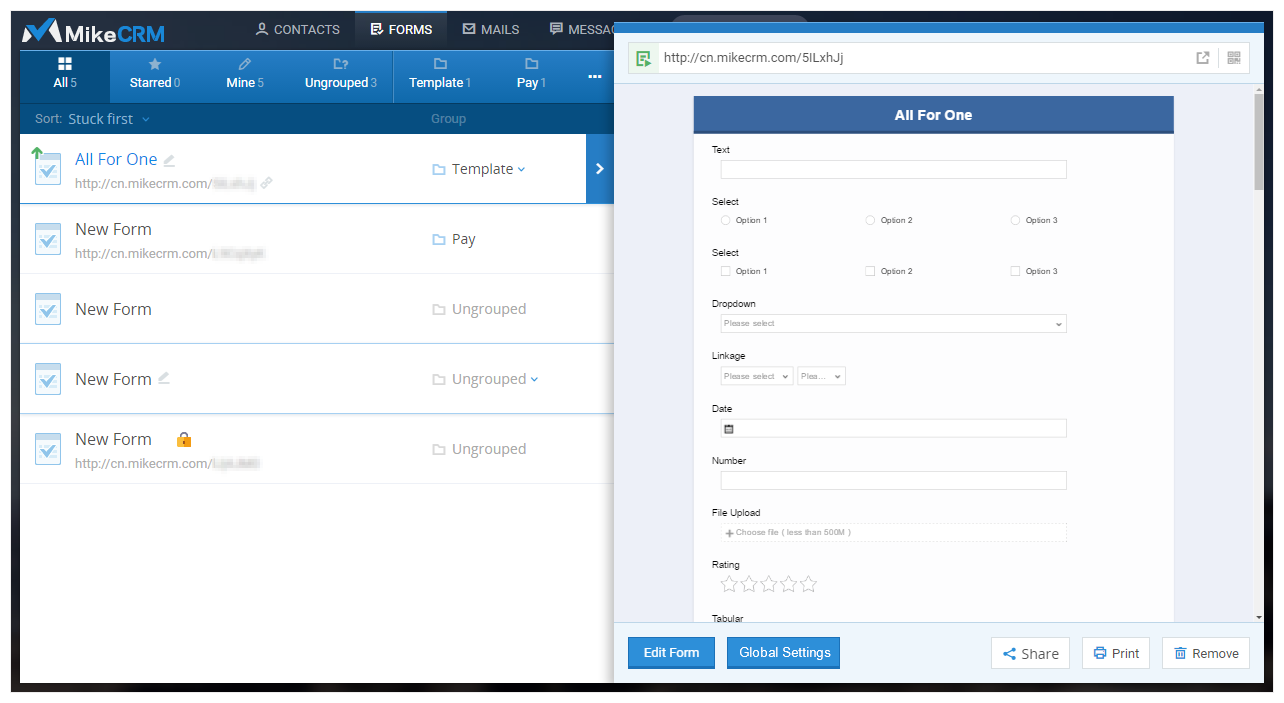 The quckview page simulates a small-size browser window and presents the scale-down version of the current form where you may fill in the form but cannot submit it.

The form link and a QR code icon lie at the top of the window. The icon next to QR enables you to directly open the form in a new window. There are also several common controls at the bottom: Edit Form, Global Settings, Share, Print and Remove. As we have introduced these features, we're not going to introduce them here. In short, you can click one of them and enter the corresponding operation interface.